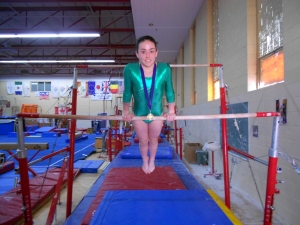 The Island Gymnastics Academy girl’s competitive team dominated at the March Break Invitational in Amherst, NS over the weekend and won all-around medals in virtually every category, securing yet more positions on Team PEI for the upcoming Atlantics in Newfoundland and the Eastern Canadian Championship in Quebec.

The Academy’s best performances of the weekend were from the Novice 2 girls. The Novice 2 girls team claimed 1st through 5th in the all-around, with Academy athletes on the podium for all four apparatus. Megan Doucette (above photo), PEI’s top-ranked Novice 2 gymnast, led the team with the all-around gold medal and the highest overall score of the competition in any category. Asia MacMillan and Clare Murphy took the silver and bronze all-around medals. Jenny Campbell, Elizabeth McQuaid, and Samantha MacAdam placed 4th, 5th, and 8th respectively.

“This group of girls is the strongest Novice 2 team we have had in years. We are expecting excellent results at Atlantics in April.” says Academy coach Janice Hicks.

The top performer in the Argo 3 girl’s team was Karisa Quinn with the overall gold, as well as 1st on vault. Jenaya Ross was close behind with the silver medal in the all-around, claiming top spot on beam. Emma MacIntyre placed 3rd on bars and 6th overall.

Emma Christensen in Argo 2 earned her highest marks this year, winning gold in the all-around as well as 1st place on vault and beam. Her outstanding performance earned her qualification for Atlantic Championships this April in St. John’s, NL. Reese Kelly was the bars champion and claimed the silver all-around medal.

Dara MacInnis continued her successful year as PEI top-ranked Tyro 2 gymnast with yet another medal in the all-around. Her strong performance earned her the silver overall medal as well as 2nd place on bars and 3rd on vault. Teammate Molly Rainnie was 2nd on floor and 7th overall. Callie Thomson was 6th on floor and Janelle Quinn took 3rd place on floor.

Open 2 gymnast, Morgan MacDonald, won the silver medal in the overall, winning 1st place on floor, 2nd on bars and beam, and 3rd on vault. Morgan will represent PEI at Atlantics this April. Natalie Haddad also achieved the necessary scores to confirm her place on Team PEI for Atlantics with a 9th place finish including 4th on floor and 6th on vault.

Open 5 gymnast Cassie Feehan also qualified to compete for PEI at the Eastern Canadian Championships with her highest score this season, and the most difficult beam routine of the entire meet. Her solid routines were rewarded with the gold all-around medal and 1st place finishes on bars and beam.

In the level 4 category, Paige Mills placed 1st overall in Tyro. Alison Muise was the gold medalist in Novice 4, claiming top spot on beam and floor as well as securing her spot on the team to the Easterns.  Annika Landry was the silver medalist, taking 1st place on vault and bars.

Currently the top-ranked Tyro 3 gymnast in PEI, Tessa McGuigan claimed the gold medal in the all-around. Her outstanding performance also earned her top spot on floor, beam and bars and 3rd place on vault. Alicia Muttart was 4th overall, placing 4th on beam and 5th on bars. Selina Mahajer took 2nd place on floor and 4th on bars for a 7th place finish all-around. Sydney Sear was 7th on vault and place 11th in the all-around.

“We were thrilled with our meet results this weekend. Such strong performances are encouraging as we head into Provincials, which we are hosting at the end of March.” adds Academy Women’s Program Director Sharon Gareau.

This entry was posted in Uncategorized. Bookmark the permalink.
Loading Comments...