The Island Gymnastics Academy, in partnership with the Delta Prince Edward, will host over 500 of the region’s top gymnasts at the Prince Edward Classic, January 25-27, 2013. The competition will take place in the Chi-Wan Young Sport Centre at UPEI. The Delta will be at full capacity as athletes from all across Atlantic Canada arrive to compete for a spot on their provincial teams. Athletes who qualify at this competition have the opportunity to compete later in the season at regional & national championships. The Island Gymnastics Academy has hosted this competition annually for the last seventeen years.

“This year’s competition is our largest ever with athletes from seventeen different clubs participating, from all Atlantic provinces.  It is the premiere invitational competition for our region and an important qualifier for our provincial teams.” says Meet Director Lea Rand.

This event is open to the public providing Island gymnasts the opportunity to showcase their talents for a hometown crowd. The Saturday evening session, which begins at 4:00pm, will feature the National level athletes and promises to be an exciting competition. The Academy’s Scott Chandler and Matt Gallant will compete in the High Performance categories as they prepare for the upcoming Elite Canada in Edmonton. 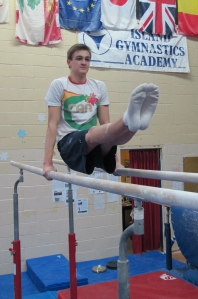 “Matt Gallant has moved into the Junior National category this year and we expect him to perform well enough to be named to the National Team this season. Scott Chandler is also back from an injury and set to compete again in the Senior National level. “ adds Men’s Head Coach, Jim Rand.

This entry was posted in Uncategorized. Bookmark the permalink.
Loading Comments...